I went to jail, finally

After 4 weeks of being "providentially hindered" by lockdowns and snowstorms, this week I was finally able to teach the inmates in a nearby prison. I'm substituting for a couple of weeks while a faithful brother, who has labored here with the Word for several years, takes a break.

To be brutally honest, I didn't look forward to going. Going to a place where you can expect to be scammed, lied to, and maybe even physically harmed isn't very appealing to me. But my friend deserved a break and I wanted to be able to better pray for him and his ministry. So God strengthened me to ignore my feelings and do the responsible thing.

Next to me in the bedroom-sized chapel was a large whiteboard filled with religious terms translated into Arabic. Besides the Muslims, Jehovah's Witnesses are also active in the prison. And then some of the prisoners have appointed themselves as Apostles and Prophets. The true Christians in prison are indeed like sheep without a Shepherd.

Before I began my lecture on the 10 commandments one of the men in attendance informed me that he did not like it when teachers preach against other religions; he said, "it tears down my faith." Since I was teaching on the First Commandment ("You shall have no other gods before me") I didn't expect to please him.

The study turned out fine and we had a good season of prayer afterwards. My feelings towards these men have warmed, too. Next week it won't be as hard to go back.
Posted by Tim at 12:39 PM No comments:

The benefits of serving

When we moved here Kristin and I decided to get involved serving Christ in our community. When we failed to do this in other assignments those times were drier and less content. Isn't that ironic? Contentment eluded us until we stopped focusing on ourselves.

Kristin has been volunteering at the local Crisis Pregnancy Center. Like other mercy ministries in this country, there's mercy given and there's mercy abused. There are those that want free ultrasounds, etc, just because their insurance won't cover them and they don't want to spend their own money. There has even been a woman who called the CPC trying to sell her baby to the highest bidder. Amazingly, she became irate when the CPC wasn't interested in making a wager.

Last week there was a young teenage girl whose mom doesn't let her date yet now has a positive pregnancy test. The equally young boyfriend came in with her and is very scared. The only thing keeping the girl from getting an abortion is the $300 that Planned Parenthood (next building over) charges. So I'm thankful for the free counseling, ultrasounds, and prayer that the CPC provides. It opens your eyes to the needs lying just below the surface in the people all around you.
Posted by Tim at 9:16 AM No comments:

Worship tips from a 4 year old

At the start of tonight's worship service Isaiah spouted out these important reminders to us:

As it turns out, he didn't live up to his own standard, except for the picking the nose part (we think). It's hard to keep a 4 year old still on Christmas Eve.
Posted by Tim at 9:21 PM No comments:

Our secret worship plan for 2007

Kristin and I have decided what helps we'll use next year for our private worship, or "secret worship" as the Confession calls it. 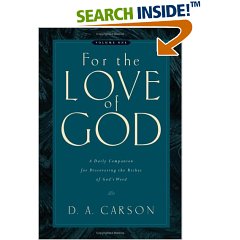 Carson modifies Robert Murray M'Cheyne's Bible reading plan. Each day there are four sections from the Bible to be read, usually each section is one chapter in length. The first two in italics are for family reading. Carson's devotion of the day comes from one of the family's readings and enlightens the reader on the biblical content of the passage with application. The other two chapters are for private reading. If a person reads all four chapters including the devotion, he or she will read the New Testament and Psalms twice and the rest of the Bible once in a year. 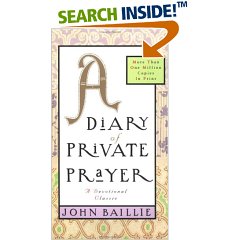 This prayer-help was recommended from a Mars Hill audio book. John Baillie (1886-1960) was a Scottish theologian and a Calvinist. His greatest work was this compilation of prayers. It is arranged into prayers for each morning and evening of 31 days, plus extra prayers for Sundays. The odd-numbered (right-side) pages have the prayers, while the even-numbered pages are empty for your own notes. The prayers are a combination of ancient prayers, various Christian liturgies, Scripture, and Baillie's own writing. It is written in elegant King James English, but it is certainly accessible to anyone who can read.
Posted by Tim at 8:05 PM No comments:

The (snowball) fight before Christmas

We sneaked over to the Overbeeks this afternoon for a kids vs. adults melee. 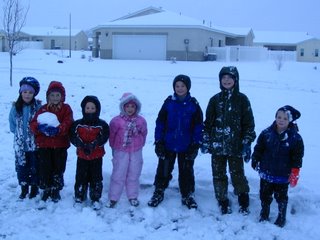 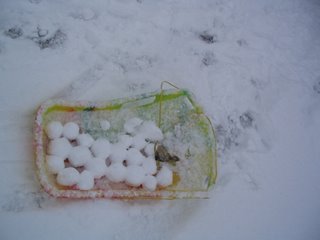 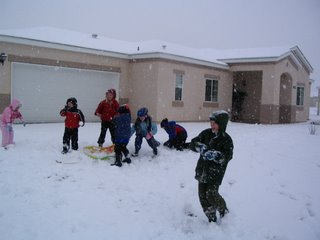 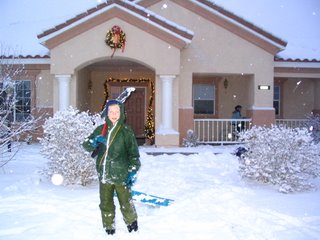 What third world Presbyterians can teach us

We spent an enjoyable evening with some friends who hosted a family who will soon be moving to the Philippines with Mission to the World. I asked him if his time among Filipino Presbyterians has revealed any blind spots in Western Presbyterianism. He responded with, "the doctrine of the Holy Spirit." We have a hard time believing in spiritual warfare, demon-possession, and the like, but I'm told it's more apparent in the East.

Kristin and I had an unusually tough day today; it was more than just a typical bad homeschooling day. There was a painful phone call, weird bills in the mail that have to be straightened out, and medical bureaucracies that choose today to be obstinate.

We ended the day frustrated and feeling defeated, but also thinking back to last night's discussion that maybe this could be spiritual warfare. If it is, the gospel reminds me that God has a good purpose in these things, too.
Posted by Tim at 9:40 PM No comments: 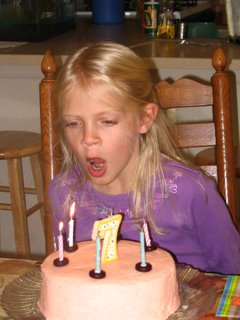 Grace turned 7 last month and celebrated with bowling with her best friend. 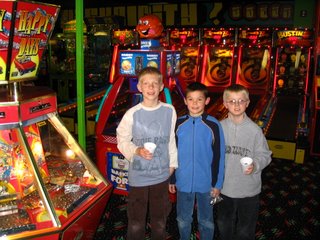 Eli turned 9 today and celebrated last week with an evening at "Nickel City" and a sleepover with 2 friends.
Posted by Tim at 9:21 PM No comments:

A cloudy Monday and a tedious workday was suddenly brightened when I was given an opportunity to present the Gospel to a co-worker who was raised a Unitarian but is now agnostic.

God's providence in these matters is always intriguing. Earlier in the day I walked over to his part of the building to get some info I need for a project. At that moment he was leading a heated conversation supporting a recent Court decision to stop giving special benefits to prisoners for participating in a Christian prison ministry. I did not enter into the conversation, got the info I needed and went back to my part of the building. Later, at the water cooler, he walked up and wanted me to know he wasn't putting down Christianity. This led to a natural discussion about his beliefs; I wasn't surprised to learn he believed that if he is good enough he'll be taken care of when he dies because if there is a God he must be good. Referring to the 10 commandments, I talked with him about God's holiness, our problem with a holy God, and the only solution that we have in Jesus as a substitute for us.

He listened with some interest as I exhorted him to consider the claims of the Bible and its trustworthiness for teaching us what to believe about God and us. What a great way to brighten up an otherwise dull Monday.
Posted by Tim at 6:14 PM No comments:

The above-the-fold, front page headline in today's Albuquerque newspaper is "Female Pastors Discuss the Trials and Rewards of Their Chosen Career Path." There is no timely news event that justifies the prominent place in the paper; it's simply a puff piece for religious feminists.

Of course it opens with Galatians 3:28 (i.e. there is no male or female in Christ, we all are one), and how that verse means so much to female pastors everywhere. One wonders how any pastor can, with clear conscience, apply this verse in such an unfounded way. As expected, there is scant mention given to the solid Biblical reasons for excluding women from the pastorate (1 Tim 2:12, for starters). Instead evangelicals and Roman Catholics are portrayed as following tradition--an apparently out-moded and discriminatory tradition.

To understand the Biblical position more fully, check out the Council on Biblical Womanhood and Manhood.
Posted by Tim at 2:36 PM No comments:

Reproaches or Riches, is that a choice for us?

In an attempt to get back to blogging, I put this post to you in the form of a question.

He considered the reproach of Christ greater wealth than the treasures of Egypt, for he was looking to the reward.

Is Moses' choice -- which included the denial of earthly treasures -- a choice that American Christians should make today? What would this look like? and what doesn't it look like?
Posted by Tim at 8:17 PM No comments: