Lunch with a pilgrim

I enjoyed meeting with a friend from work today to discuss the gospel. He's "interested in religion" and is looking for something to fill an emptiness.

We had an earnest discussion about the God-shaped vacuum in everyone's heart. I feel that this friend was lovingly warned about sin and God was honored with the presentation of the gospel of Jesus Christ.

It was a joy to share the gospel at length and this time with a friend that in God's providence was interested in hearing it.
Posted by Tim at 7:41 PM No comments:

What he must be if he wants to marry my daughter

The title of this new book intrigued me so I bumped it ahead of several others in my stack to read. Also, Kristin has been encouraging me to start talking with Grace (9) about modesty, young men, etc so this book was also timely for me.

Here's a one sentence summary: since the typical approach to dating has many serious drawbacks, fathers need to exercise their biblical responsibilities by protecting their daughters until they are ready for marriage and pro-actively help them find the right man to marry.

Baucham breaks down the picture of "the right man" into 10 godly qualities fathers should look for in a future son-in-law. Among these are

He must be a Christ follower;
He must be prepared to lead;
He must lead like Christ;
He must be committed to children (which includes a commitment to have them, invest in them, and support them).

In each category, Baucham includes arguments for these propositions and provides biblical answers to the most common objections. I found it especially helpful that he anticipates a number of concerns that young women may have. He also understands that few young men fit these criteria and addresses that with a series of recommendations.

Examples from the author's counseling experience are sprinkled throughout the chapters making this an easy read. This book is a good and practical "headship handbook" and is the first I've seen to consider the topic from this angle.
Posted by Tim at 9:08 PM No comments:

Mike's back in the blogosphere, chronicling a daunting travel goal and still giving away stuff.
Posted by Tim at 10:12 PM No comments:

After a great vacation, we're heading home. Here are some pictures from the last few days.

The family's first visit to an In n Out Burger was a good one. 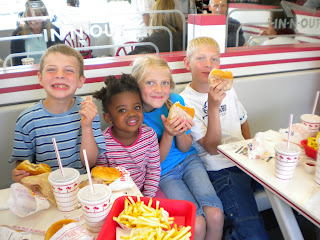 San Diego has a nice maritime museum. This was the ship used in the recent film Master and Commander. We all enjoyed acting like midshipmen. 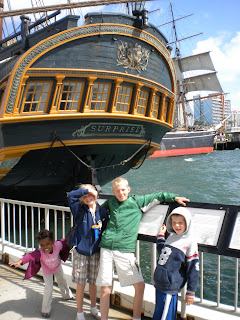 Grace peers through the periscope aboard a Cold War era Soviet Sub (notice in the background is one of the 3 "pots" for a 78 member crew). 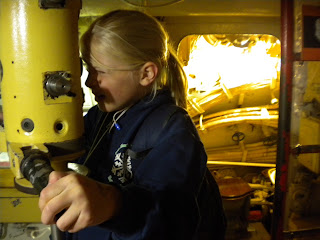 Seals have taken over one of the local beaches here; they enjoy sunbathing as much as we do (they're not dead, just comfy). 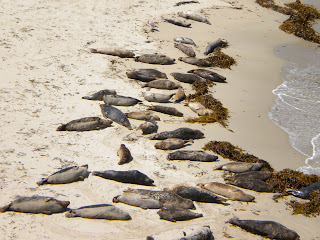 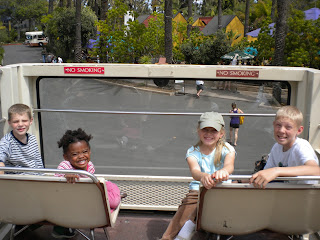 On our last trip to the beach there was Treasure Everywhere and Eli stumbled upon a sand dollar. 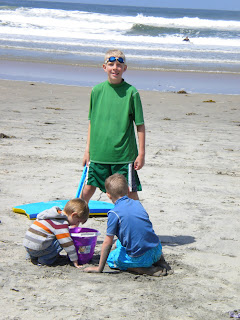 Your galaxy is safe with us

Everybody has to be good at something... 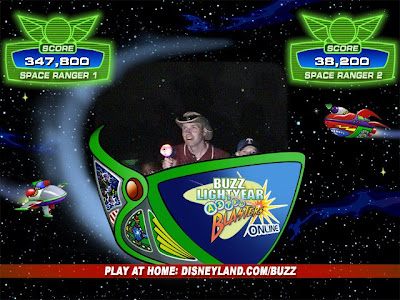 If you look close you'll see Faith is in my ship perfectly demonstrating the defensive fighting position. 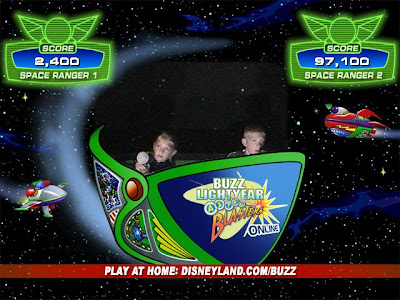 We all had a great time at Disneyland yesterday.
Posted by Tim at 9:07 AM No comments:

TIME magazine recently listed "new Calvinism" in the top 10 ideas changing the world. I've meandered through Calvinism's big tent (this blog was originally intended to record that trek), benefited in many ways, and wrestled with the differences between its diverse leaders, all who are described as being "reformed".

Scott Clark (of Westminster Seminary, California) penned a lengthy book out of concern for that adjective "Reformed". He argues that it has a historic meaning that is more encompassing than the suddenly in vogue doctrines of grace.

WORLD magazine (April 11th, 2009) ran a brief review of Colin Hansen's Young, Restless, and Reformed that hints at an encouraging aspect of this growth. "Many young pastors and church members are becoming Reformed", the reviewer comments. Then he quotes Hansen, "A vision of the transcendent God takes their breath away. When they see that theology can drive a deeper and more passionate relationship with God, they tend not to worry about potential debates over doctrine."

Overall this quote is heartening--when a person better understands who God is it's a positive development and it should stir the affections. But before someone starts calling themselves "Reformed" wouldn't it be helpful to know what that term historically entails? I'm convinced that most don't, and that leads to confusion.

I was expecting Dr. Clark to address this development in his book and was hoping he would provide what is lacking today (to my knowledge)--an inviting exhortation for those among the new Calvinists to embrace the full meaning of Reformed. However, I think he wrote this book before Hansen's work and certainly before TIME ran their piece, so that was not the chief focus of this volume.

Instead, and still importantly, this book is a call for the established reformed churches to first get their house in order and to return to the confession they say they believe. Dr. Clark boldly calls out many areas where we have lost sight of our Reformed heritage in our theology, piety, and practice. Most among the Reformed have drifted into broad evangelicalism, been affected by revivalism, and we have suffered for it.

After diagnosing the problems, Clark suggests the remedies. In addition to returning to our confessional practices in such areas as the regulative principle of worship and the means of grace, he argues that the Reformed community needs to also draft new confessional statements which address the issues confronting the modern Church.

Modern evangelicalism has been a significant shaping influence in my life and one that is often at odds with the confession I say best summarizes Scripture. Dr. Clark's book reminded me that "Reformed" is a full-orbed term codified in confessional documents and he challenged me to recover the reformed confession in several areas of my life.
Posted by Tim at 9:26 AM 6 comments:

We could get used to this

We enjoyed seeing some friends today who we used to know in ABQ but have lived here in Southern California for a couple of years. Their church home provided a friendly place to worship and a good Sunday school class.

Here are a few pictures from the last couple of days (we replaced our broken camera). 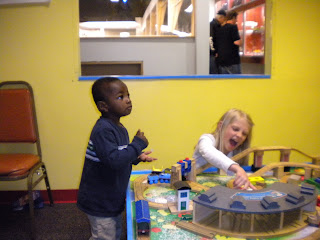 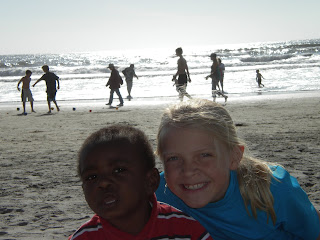 So far we've done Legoland, SeaWorld, the science center, the toy train museum, and the aquarium, but the beach is everyone's favorite. 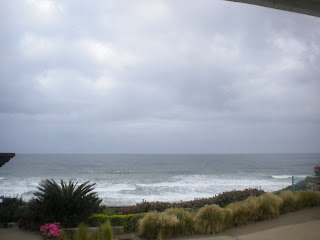 The view out of the kitchen window.
Posted by Tim at 8:26 PM No comments:

From where we are vacationing we have a good view of the Pacific Ocean with its waves rhythmically rolling up and down the beach below the bluff this house rests upon. As beautiful as this image is, God means it only to point to the wave upon wave of grace that flows from Calvary's cross. Again this morning, Valley of Vision has been used of God to draw out my affection to that which can truly satisfy.

From Calvary's cross wave upon wave of grace reaches me,

deals with my sin,

draws out my affection,

kindles a flame in my soul,

rules throughout my inner man,

consecrates my every thought, word, work,

teaches me thy immeasurable love.

How great are my privileges in Christ Jesus!

Without him I dare not lift up my guilty eyes;
in him I gaze upon my Father-God and friend.

Without him is gaping hell below me, and eternal anguish;
in him its gates are barred to me by his precious blood.

Without him all things external call for my condemnation;
in him they minister to my comfort,
and are to be enjoyed with thanksgiving.

Praise be to thee for grace,
(it sustains the redeemed soul and not one link of its chain can be broken!)
and for the unspeakable gift of Jesus.
Posted by Tim at 7:42 AM 2 comments:

"It is little to see Christ in a book, as men do the world in a card. They talk of Christ by the book and the tongue and no more; but to come near to Christ and embrace him is another thing."

Samuel Rutherford to the Lady Kenmure while imprisoned for Christ
22 Nov 1636
Posted by Tim at 8:33 AM No comments:

After a full day at the beach yesterday, today was time for Sea World. The camera broke so there are no pictures to post, but we made the most of our day and saw many of the shows and did the rides. It was a great time; I think each of the children found several things that they really enjoyed. Kristin and I were happy, too in that we didn't lose any of the children.

I'm thankful for Sea World's "Here's to the Heroes" discount for military families; without it we couldn't have afforded the cost for our large family.
Posted by Tim at 9:35 PM No comments: 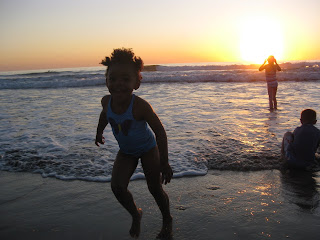 An evening on the Pacific coast near San Diego.
Posted by Tim at 9:21 PM No comments: 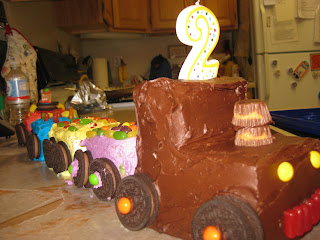 Two years ago on this day we were finishing our homestudy and hoping to adopt sometime before we moved. The day after we completed the basic paperwork we received a call and were matched to Zeke. He was born on April 4th and we were soon in route to pick him up.

That "one-day pregnancy" is an amazing adoption story, but one with sad implications of how great the need is to adopt minorities domestically.

Today I passed the last Air War College test, a 13-month correspondence program focused on leadership, international policy, and military strategy. I can't believe I got through it!

The timing worked out nice. We're heading off to San Diego and points beyond this weekend to see the sights. Because of the size of our family we decided to rent a house for the time we're there. The Vacation Rentals By Owner is a really handy website for such a thing. For us the costs are about the same as two hotel rooms.
Posted by Tim at 8:09 PM 2 comments: