Tucked away in a cabin in the woods of Michigan I was able to finish off a couple of books. Mother Kirk (Doug Wilson) was an excellent "gap-filler" for anyone who, like me, once thought that "Reformed" meant nothing more than affirming God's sovereignty in salvation.

The other book was On Being Black and Reformed by Anthony Carter. Since this topic is rarely considered, a brief review is worthwhile. There are two separate messages in the book for two different audiences. First, it's a well-thought out appeal for African-American Christians to adopt the biblical and historic Christian faith. Second, it's an appeal to white, reformed Christians to learn from the African-American experience. And that's where I want to dwell.

According to the author, theology is local. Whether it's German Lutheran, Dutch or Scottish Reformed or even Northern and Southern Presbyterianism, theology has consistently had a distinct ethnicity or culture. And for America, our articulation of reformed theology needs to include the African-American Christian experience.

Specifically, the African-American experience is one of a dominated people forced to live on the fringe of an affluent society. It's the cry of a people who live lives of want and need in a land of plenty. It is the cry of the nation of Israel in exile. Yet, white American Christianity is so far removed from "sojourning" that it rarely connects with this important motif of the Christian life. This hinders our understanding and expression of the Christian life as a pilgrimage through a foreign land.

Through African-American history God has sovereignly given to American Christianity a people who have experienced pilgrimage in a foreign land. "How shall we sing the Lord's song in a foreign land (Ps 137:4)?" Look to the black Christian experience as an example.

Our week in Michigan was fantastic! We made some great memories at the Sleeping Bear National Lakeshore (on Lake Michigan). None of us had ever seen such scenery. The hilly hardwood forest covering thousands of acres began to burst into fall color while we were there. We lumbered down a dirt road notched out of the forest and then parked the van. A short trail through the thick woods suddenly brought us onto a beautiful untouched beach that stretched for miles up the coast. No condos, no high-rise hotels, just an invigorating mixture of fresh mountain air and cool sea breeze. A combination we've never experienced. We could have stayed and played forever. 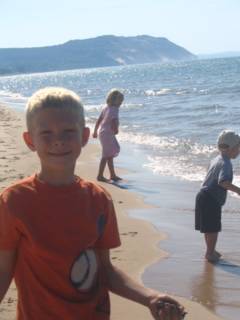 We also had heard much about the Dune Climb and thought we'd give it a visit. This towering mountain of sand has been blown into place by the storms of the Great Lake. We kicked off our shoes and raced up the near-vertical sandhill that stretched unendingly up to the sky. We all expected to have a good view of the lake from the top of this hill, but instead were surprised by a short flat stretch and then another steep, long hill. By this time Eli had been struck blind by the blowing sand, which was also heating up our bare feet. Grace and I re-doubled our enthusiasm about the vista over the hill and dashed off. What fools! Again another short flat stretch and then a tall hill. By this time our children were exhausted, our lips were splitting, our legs were twitching, and we were the grumpy Israelites wandering in the desert wilderness for who knows how long! I decided to scout out the next hill and if the Promised Sea was not in sight we'd head back to the pleasures of the van. But having wasted all my energy stupidly-sprinting up the first two hills I was only able to ascend the third on all fours. Alas, but more of the same. We fully acknowledged that the Dune Climb had beat us and moped back down the mountain. Later we found out that what we thought was only one hill was actually a 4-mile stretch of mounting sand! 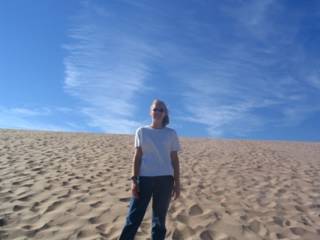 During a conversation with my Christian friends in Illinois it became apparent that in their minds the ideal Church for today is the primitive Church, as described in the book of Acts. They continue to go back to that Book as their guide and final authority on what the Church today should be doing. And of course, they're right, to a limited extent.

But beyond that limited extent, they're dangerously mistaken. For instance, I can look back to the day of my conversion and enjoy how God was working in my life at that time. Do I want to go back to that time? NO! Scripture is clear--we should not stay as babes in Christ but mature to manhood in Him.

Scripture is also clear that God was not done with the Church in the book of Acts. Rather He would perfect it over time. If you really want the Primitive Church, you'll have to give up the Trinity, the canon of Scripture, the nature of Christ, etc. These all came later.

My friends shy away from Church History, I guess for them the differing traditions contradict and cover up any noticeable development of the Church. It should be no surprise that tares have grown up with the wheat, but that shouldn't keep us from learning from what the Church has already wrestled over.

My friends and I have been raised in the age of television. We live in an affluent culture, free from persecution, but not free from postmodernism. We don't hold a candle to the flame of our spiritual fathers and their devotion to Sola Scriptura. To put aside the wisdom of the ages and try to figure it out for ourselves is dangerous indeed.

This Too is the Word of the Lord

During our visit to Illinois I had a great conversation with some men I respect concerning whether preaching is beneficial to little children. I, along with the Reformers, affirm that it very much is.

The Second Helvetic Confession (1566) stated this boldly, “the preaching of the Word of God, is the Word of God.” The Heidelberg Catechism says that preaching opens and closes the kingdom of heaven (Q83, 84). Consider the Westminster Larger Catechism,

Q155. How is the Word made effectual to salvation?
A. The Spirit of God maketh the reading, but especially the preaching of the Word, an effectual means of enlightening, convincing, and humbling sinners; of driving them out of themselves, and drawing them unto Christ; of conforming them to his image, and subduing them to his will; of strengthening them against temptations and corruptions; of building them up in grace, and establishing their hearts in holiness and comfort through faith unto salvation.

If parents understand that preaching is the primary tool of the Holy Spirit to produce faith, and that it is primarily through preaching that we hear the Shepherd’s voice, they would want even the littlest lambs to be present. To send them out of the room during the sermon would be a denial of the efficacy of preaching and inconsistent with what we desire for them.

There is none like you among the gods, O Lord, nor are there any words like yours. Amen.

Finals week is over! After being couped up studying and testing all week (with no blog time), I'm ready for a road trip! Tomorrow, we're heading to see some friends and worship over in Illinois. Then we're bound for a cabin in the woods around Lake Michigan in time to catch the
autumn colors.

In other news, this week also proved fruitful for discipleship. Two baptist friends that I study the Bible with suddenly have a great, and it seems, authentic interest in reformed theology. They've never heard about the doctrines of grace. They told me they just want to know the truth, and they seem refreshed to hear biblical theology.

We'll start a new study next week in Genesis. I look forward to showing them God's intervening grace from page 1 of the Bible. I also invited Michael (from Taiwan) to attend and he seems interested. I'm praying that he will.

In our reading of Acts 2:1-11 we see that Jesus keeps His promise to send the Holy Spirit to those that wait in Jerusalem. And indeed He came with power!

I don't think it's a stretch to say that our Lord still does this. Those that wait in the New Jerusalem, that is the Church, receive the power of the Holy Spirit. Our own shorter catechism says that the Holy Spirit ordinarily works through the preaching, sacraments, and prayer to "build us up in holiness and comfort, through faith, unto salvation." (see WSC 88-89)

Create in us clean hearts, O God, and renew a right spirit within us. Cast us not away from your presence, and take not your Holy Spirit from us! (Ps 51)