For us Reformation-minded Christians, Oct 31 marks the 491st anniversary of Martin Luther ushering in the Protestant Reformation by nailing his 95 Theses to the door of the castle church in Wittenberg, Germany.

Why should you join in celebrating the Reformation?

For many more good reasons to celebrate the Reformation, head over to Challies for a Reformation Symposium.

Syncretism consists of the attempt to reconcile disparate or contradictory beliefs, often while melding practices of various schools of thought. Here's an example: family worship in Halloween costumes. I must be becoming a liberal (theologically speaking). 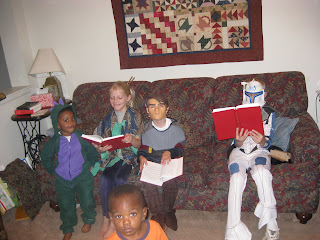 Since our pastor is out of the country I preached today. Now that it's over I'll share a dream (a nightmare really) about the sermon from a couple of nights ago.

I dreamed that I arrived at church in a raggety t-shirt and shorts. Only 4 people came to church and I forgot my Bible. I borrowed one but when I opened it in the pulpit the letters were so tiny that I couldn't read any of the words. I squinted and stared at it long enough that people started whispering to each other and chuckling. So I borrowed another one. But this one was like a magazine; there were advertisements all through it and even though I feverishly searched I couldn't find my Scripture text any where in it. Now the congregation (all visitors in my dream) was cracking on me outloud and eventually I just gave up and left.

Before leaving the house this morning I double and triple checked that I had my Bible with me.
Posted by Tim at 8:40 PM 2 comments:

This video was on ESPN Gameday about Georgia head coach Mark Richt and his family. It focuses on two children that they adopted from Ukraine, including one that has a facial deformity.

Illustrations set to the music of Andrew Peterson's song, "I Am a Family Man"


HT: Between Two Worlds
Posted by Tim at 6:09 AM No comments:

Tale of a bad date night

If last night's date had been my first with Kristin I'd probably never see her again.

I'll put the good news up front; WE HAVE FOUND A GOOD BABYSITTER. This is an answer to prayer for us as I have shared with our covenant group.

Now for the rest of the story in which whatever Tim does goes wrong. Once the sitters (2) were settled I drove Kristin to my favorite Chinese place. Turns out it was closed for a private party. That's a wasted drive, but we quickly re-grouped because we were pretty hungry and there's lots of good restaurants in Albuquerque when you don't have kids with you. We decided on Greek (which the kids hate), so we drove to one we liked across town. We got there, parked in a riduclously small parking spot, went to enter the restaurant and found the door locked. It was closed for repairs which explains why there was an old, grumpy-looking Greek guy on the roof when I pulled up! I returned to the car, sat there and wondered how hard can it be to find an open restaurant in Albuquerque on a Saturday evening!

I made up my mind that I had had enough. We were near the university campus, hungry, and desperate. We saw a deli and were willing to settle for it. I parked the car (this time dusting off my parallel parking skills) and walked up to The Cheba Hut advertising "Toasted Subs". As we walked in I noticed some strange college-looking signs and posters but it didn't register until it was too late. This was a very pro-pot (as in marijuna) kind of place! No matter how much we stood out in this place, we were there and we were hungry. We tried to overlook the Cheech and Chong posters, Bob Marley photos, and other pot-culture fanfare. We opted to eat outside in case the cops decided to bust the joint during the dinner hour.

After quickly finishing off the sandwich, it was time to head to our next disappointment. We drove over to Justin's house, about 20 minutes away, to check on it (how romantic of me). After we pulled into the driveway I realized that the keys to his house were still back at my house. "Haa haa honey, let's go do something else!"

I won't bore you with more details but suffice it to say that other things we tried to do last night were either closed, broke, or broke while we were there. The Cheba Hut was the highlight of the evening. And I'm glad Kristin married me.
Posted by Tim at 9:09 PM 2 comments:

Kristin and I attended a friend's wedding this weekend near Portland, Oregon. We had a fabulous time, thanks in very large part to a great couple that watched all of the kiddos while we were away!

My camera didn't do too well with the lighting, but here are a few wedding photos from yesterday.

The first kiss for Mr and Mrs Sorice 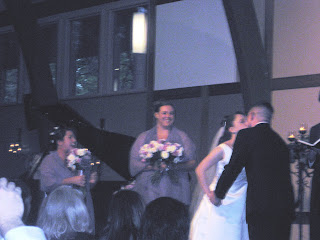 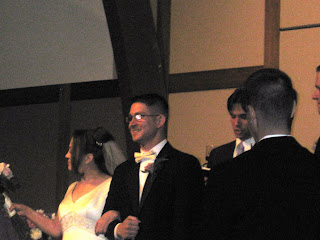 We also enjoyed catching up with Chris and Jennifer; he was the best man and she sang during the wedding. 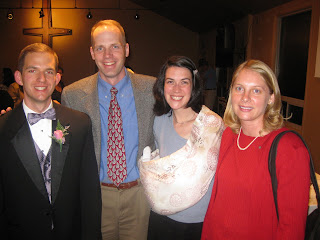 Since the wedding was in the evening, that gave us the day (which was sunny!) for tooling around Portland. What a refreshing contrast to New Mexico's desert landsape! It was like waking up to spring after a long winter. 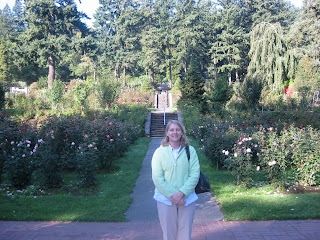 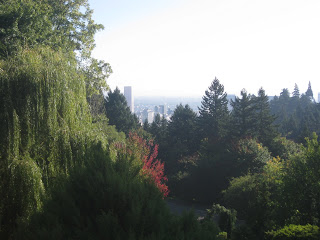 Tributes for a deceased brother

In what may be the best use of blogging I've seen, this week several friends have posted tributes to Brent and his family on the first year of his sudden death (here, here, here, here, and in the comments pages associated with those sites).

We also remember him fondly. Brent and his family convinced us to make Providence our home church. They didn't do this with words; I don't think they even realize that they had any effect on us. But they're the kind of people that once you meet them you can't help but to love them and want to be with them again, and hopefully, to become more like them. And that's what happened to us--it was the easiest church decision we've ever made!

I was visiting my mom in South Carolina last October when a somber phone call delivered the blow that he was dead. Through it all, his wife has rested on God and found Him faithful.

I can't estimate the effect that knowing Brent, even for a short time, has had on me and my family. But one Day I will know and will get to thank him in person.
Posted by Tim at 8:42 PM No comments:

Eli and I went for a hike up the famous La Luz trail today with some friends from his school. It was a beautiful, autumn day. 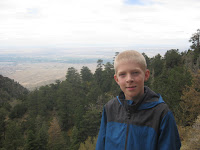 We started a rock slide (by accident) on the way down. 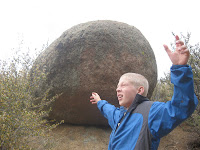 There's no better time than election season to become familiar with the historic church teaching of the two kingdoms (how to properly understand church and state). White Horse Inn has a good broadcast discussing how two senior leaders in politics (one a democrat and the other a republican) can share the same reformed faith. The guests are Dan Bryant (former Assistant Attorney General for the Department of Justice), and Neil McBride (a strategist for the Democratic Party). Good listening!
Posted by Tim at 4:10 PM No comments:

Been in trouble with the law

On the way home from work today a police cruiser side-swiped me. The collision smashed the passenger side of my car and blew out my tire. The police car's front was peeled off like a banana.

As I watched more and more police officers show up at the scene of the accident and overheard the driver of the police car (a young airmen) tell his side of the story again and again I started to worry about how this might turn out. Then the investigating officer came over to me and opened with the words, "We're not going to arrest you, but...". It looked like I was going to have to pay for the damage and receive a serious citation for "failing to yield to an emergency vehicle."

Thankfully, in God's providence, a friend showed up and recommended getting the legal office involved if they continued to try to pin fault on me when it was obvious from the impact point on my car who was at fault. That advice worked very well. Within an hour I was cleared from any blame and allowed to leave. After I replaced the mauled tire.

Kristin says the car is invisible because people are always pulling out in front of us. We were hit a couple of months ago by a truck pulling out of a parking space. The driver of the truck said he didn't see me.

So now I have matching damage on both sides.
Posted by Tim at 8:59 PM 4 comments: